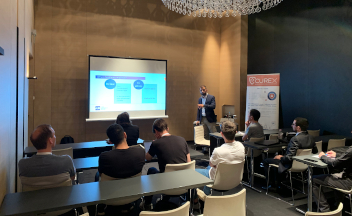 CUREX project took part in the 18th Web Intelligence conference (WI’19), where it held its first International Workshop on Security and Privacy in Healthcare (SPH). Proffesor Vagelis Papakonstatninou of Vrije Universiteit Brussel (Belgium) was one of the two key note speakers that the workshop featured, thus representing SPHINX to one more synergy action between Horizon2020 related projects.

The workshop of CUREX was organised within the International Conference on Web Intelligence that took place in Thessaloniki, Greece, on 14th of October. During this event, the sister-project of SPHINX focused on discussing a set of issues raised on e-health related aspects. As a result, the workshop included  two key note speeches by Prof. Papakonstantinou as mentioned above and Prof. Panagiotis Bamidis  of the Aristotle University of Thessaloniki (Greece), President of the Greek Biomedical Technology Society and member of the Medical Physics Laboratory. who discussed the benefits and implications of collecting everyday data through ubiquitous, long-term recordings to support vulnerable populations.

In regard to SPHINX’s contribution to the event, its consortium member, Prof. Papakonstantinou stressed the need for identifying specific actions to mitigate cyber-security challenges on the field of healthcare. His message was that healthcare carries special meaning in legal, ethical, and security context. Hence the emerging problematics affect a wide spectrum of groups, from the actual patients to doctor, researchers, entire healthcare organisations and even contracted insurance companies. Both in terms of efficient protection of human rights and compliance with the current legislation, Prof. Papakonstantinou commented that the relative projects have to act promptly considering solutions that will take into account the diverse concurrent legislation and the different characteristics and ethical prerequisites of varying stakeholders, like security industry, medical organisations, civic society etc.

The workshop constituted a significant opportunity for pundits of overlapping fields, yet different organisations, to come together and exchange valuable insights about technical specifications applied to development of cyber-security solutions for healthcare sector.