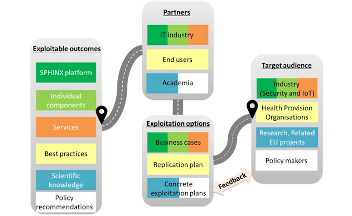 SPHINX aims to produce a cyber-security toolkit for universal application on Heath Delivery Organisations, which renders the project a challenging but also rewarding process. In this respect, the foreseen outcomes of the research and development of SPHINX can be of significant value for a diverse set of stakeholders. As a result, the business planning of SPHINX is based on a ‘road-map’ that outlines the different paths of future exploitation and sustainability of the project afforded by its development cycle. 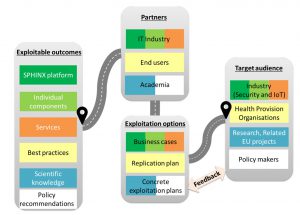 The results of SPHINX’s development can be classified in six types. First the project platform which will be deployed during the pilot showcases in four different healthcare establishments in Greece, Romania and Portugal, the individual components of the platform that potential future end users will be able to select and execute autonomously, the services necessary to deploy the platform at the end user sites such as consulting and installation services or relative trainings, the best practices that will emerge from the pilots, the policy recommendations stemmed from the implementation of SPHINX platform in replicated real environments and the scientific knowledge that will be generated through the R&D activities.

The above complex of outcomes can present exploitation benefits for both the consortium members of SPHINX and external stakeholders who are part of the Projects community. On the one side, the prospects of SPHINX results exploitation can be distributed among the different Partners who have joint their efforts on introducing this cyber-security solution for the Healthcare Sector. As the project’s consortium consists of IT Industry Enterprises, SMEs, Universities, end users (Hospitals), a research institution and a non-profit organisation the varying affordances for exploitation of different components of SPHINX Platform are firm and the internal procedures through the research and development are organised taking into account such exploitation diversity. On the other hand, the uptake of SPHINX by market ecosystems outside its consortium is one of the key goals set towards the project’s completion. Hence, attention is being paid as the project evolves, to engage with all the possible target audiences whose interest on SPHINX can result to one of the aforementioned outcomes exploitation.

Such twofold exploit-ability for SPHINX’s six outcomes is a steady step for securing an effective sustainability level. Therefore, the discussed outcomes can be positioned in three respective paths through which their exploitation can be secured by the adequate benefited parties, especially in terms of external stakeholders. That is, the business planning of SPHINX, in its initial form, focuses on providing the stakeholder audiences with three exploitation options. Namely, the business cases for the SPHINX Platform and its components are going to be elaborated so that interested parties form Industry Sector be able to learn about the applications of SPHINX and their capacities. The replication plan of SPHINX deployment as it going to be derived by pilot testings, in order to support Healthcare Organisations to deploy the SPHINX platform themselves too. And a series of concrete exploitation plans to secure the further advancement of the scientific knowledge produced, once the project is completed.

These exploitation options constitute the three main paths whose purpose lies on facilitating the engagement of SPHINX with the stakeholder audiences of its community. The business plan of the project will present these options to the target audiences in order to receive their feedback and engage them in the project activities. Different target audience groups (Industry, Healthcare Organisations, Research, Related EU funded projects, and Policy makers) will be engaged to exploit different outcomes.