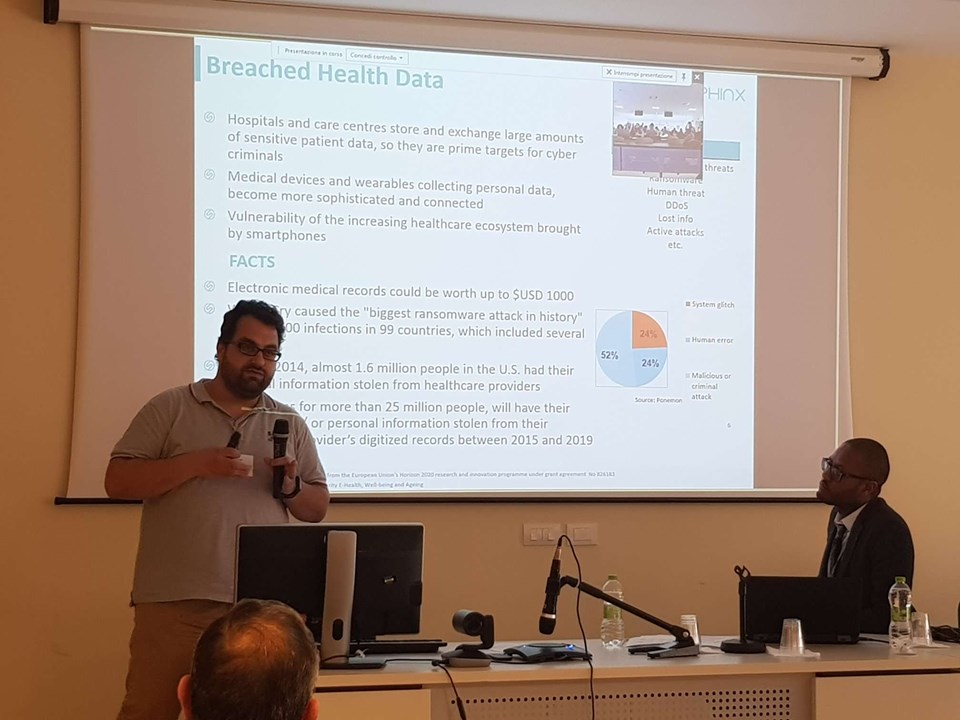 On 28 and 29 of May 2019, PANACEA organized the 1st End users/stakeholders Workshop in Rome. SPHINX project Coordinator Christos Ntanos of National Technical University of Athens and partner Dr. Evangelos Markakis of Hellenic Mediterranean University where there to present the SPHINX Project and inaugurate the first synergy activity between relevant projects.

The workshop offered a valuable opportunity for End-Users and Stakeholders to engage with the PANACEA project and to be directly involved in the End-Users Stakeholders Platform (ESP), consisting of: Healthcare providers, Medical devices & applications providers, Health information system providers, Research organisations, Policy makers and regulators, Standard Developing Organisations, Cybersecurity solution providers, Insurance companies and Patients’ associations. The event led to an exchange of knowledge and experience among the participating projects, as well as to mutual feedback extraction for each project so as to, advance its results.

In his keynote talk Dr. Evangelos Markakis of the Hellenic Mediterranean University (HMU) delivered a presentation of SPHINX Project to the wider public and explained its scope. He stressed the current cybersecurity threats and shared the SPHINX approach to the challenge followed by its objectives, the key pillars and the expected impact.

The workshop has been successfully completed resulting to new information for all the participants. Since it has been projected as the starting point for the development of PANACEA Toolkit, the workshop fulfilled its scope by setting the parts of User and Technical Requirements and Scenarios. The primary results gained through the workshop referred mainly to the protection of healthcare organizations and devices from cyber threats and prompted the definition of four models of health services & medical devices suitable for the design, development and deployment of PANACEA Toolkit.

First, the Healthcare Organization model covers the overall IT assets, the processes like operational workflows and the organizational functions. Second, the Device Lifecycle Model monitors all the device lifecycle phases. Third, the Systems Lifecycle Model entails the system lifecycle phases and roles. Finally, the Cybersecurity for Healthcare Model works on the technological services, non-technical measures, processes and roles. The above Models have been outlined as the “Standards Map” and guide PANACEA Research Partners through all its future phases.

A valuable part of the Workshop concentrated on the pilot testing of the aforementioned cybersecurity models of PANACEA by its End-User Partners, the Gemelli University Hospital in Rome, 7th Health Region of Crete and the South-South-West hospital group of the Health Executive Service in Ireland. Much like SPHINX, PANACEA Project has incorporated a crucial assessment process into its work package structure. What is more, the pilot partners of the sister project parallel the SHPINX pilot running beneficiaries, which adds value to the insights obtained by the completed Workshop.

Even though the PANACEA Project is based on a people-centric approach on cybersecurity solutions in Health Sector, the delivered real-life evaluation depicted an outline which can be followed by SPHINX pilot testing also constitutes a crucial step towards its development. Through the leverage of the information shared by PANACEA Partners SPHINX can enhance the planning its own eminent pilot testing in the respective Partners.