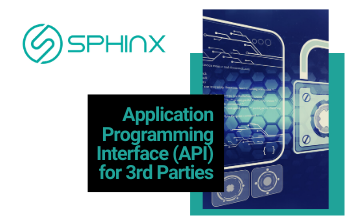 In this context, the SPHINX Application Programming Interface for Third Parties (S-API) enables third-party solution providers to access and interact with the SPHINX Platform and its components. Subject to authentication, authorisation and using end-to-end encryption, S-API exposes advanced cyber security functionalities implemented by SPHINX components, such as device/application certification, threat registry notification and anomaly detection. The third-party interface specification for each component is presented in the respective component subsection. The S-API concept is presented below:

A particularly important feature in S-API consists on the delivery to third-parties of SPHINX device certification functionalities. Specifically, S-API may be used by medical devices manufacturers (constrained hardware running specialised software or firmware) and software services providers (specialised software applications and solutions) to access the SPHINX Sandbox and receive assurance that the device and services are SPHINX-compliant and certified, therefore becoming trusted assets in a SPHINX-secured information technology (IT) ecosystem.

SPHINX provides an open API for third-parties, making its advanced cybersecurity functionalities and cyber certification capabilities available to them. This API provides a set of calls to invoke specific actions. The API calls should be well-documented and open to enable an easy integration by third parties. Via the API, third-parties will be able to discover and find which SPHINX services are available.

The architecture choice is designed to fully decouple the third-party component from SPHINX.

The high-level architecture for the S-API is presented in the following depiction.

The types of users defined for the S-API are:

More information about the Third-Parties API can be found at Deliverable 3.6 that is publicly available here.